In spite of heavy rain,15 people turned up for 10 pin bowling evening on the 28th September which enabled us to have 3 lanes.

After completing 2 games, with various methods of getting the ball from one end to the other, it was our new member Colin who had the highest score of the evening and winning a box of chocolates. We won’t mention who had the lowest score, but I think we all had a good time.

This is now becoming an annual event, but this year we delayed the date to coincide with the closure of Upper Tamar Lake for a fishing competition on this weekend.  Unfortunately, quite a few of our regulars had also booked holidays for this period, so were unable to join us.

The forecast was for wind – and lots of it!  And so it turned out, especially on the Friday.

The reservoir water level was so low that it precluded use of the launch ramp, so all launching had to be done off the adjacent beach.   With a nearly on-shore and very strong wind, this provoked quite a bit of discussion about the best way to achieve a safe departure from the beach.  Toby solved it for his Tiz Widdy by simply using his outboard to motor off, picking up his crew on the pontoon.  The others just launched and hoped!

Friday saw 8 of us, sailing on John Buckett’s Bass boat, Toby’s Lugger and John Dabbs’ Bosun.   Geoff had brought his Solo, but decided not to launch it this time.    In deference to the wind strength, The Bass and Lugger both opted for just a jib and mizzen rig, and the Bosun hoisted Otter sails.  All crossed the lake to lunch at the Cafe.  As promised, the wind increased even more in the afternoon, resulting in a rather spray-soaked sail for the Bosun crew, with the Lugger and Bass both showing impressive turns of speed, even under their reduced rig.

7 of us spent a pleasant evening at the Bratton Clovelly Inn.

On Saturday, we were joined by Mandy, James and Nathan.  Less wind, but still plenty of it.  James had brought his Blaze and soon put it through its paces.  Geoff launched his Solo and was soon flying round the lake.  Mandy put her trust in Toby and his Lugger again (now with reefed main hoisted) and almost enjoyed the experience.   The Club’s Wayfarer was launched, sporting the same Otter sails, leaving the Bosun on the beach.  The forecast was for rain to come in during the afternoon, so it was decided to lengthen the morning sail time, recover the boats and close with a delayed picnic lunch on the beach tables before preparing the boats for their respective trips to their home bases.

Lots of laughter, some strong-wind sailing lessons learned, no accidents.  What more could we wish for?

A very smart set of members of Stratton Bowling Club hosted a bowling event for a rag-bag of dinghy sailors on Saturday 13th July.

Bruce Peardon welcomed everyone, saying that they were visiting a club that was now 90 years old and tell us a bit about the club. Four teams of five players were then introduced to their coach and assistant who proceeded to give them six weeks of training in an hour! Following a delicious tea the competition began. Each player competed to represent their team in the grand final. The final was hotly contested and there was a three way tie. An extra end was needed before Cilla Gilbert became the eventual winner.

It was a great afternoon, everyone enjoyed themselves immensely.

Many thanks to Stratton Bowling Club.

The weather forecast leading up to the day was not promising, wind and rain forecast. So it was an intrepid four; John Dabbs, Jane Chadney, Sheba and Toby Tobias, who set off from Okehampton Station along the Tramlines Woods to Fatherford, in the dry mild conditions.

Going under the rail and road viaducts, we then followed the E. Ockment river in full flood, through the wooded, moss covered valley, interspersed with a variety of ferns and fungi, up to the footbridge where Moor Brook joins the E. Ockment. Continuing along Moor Brook, where we spotted a heron. Continuing up onto the Moor at East Hill where the panoramic, surprisingly clear, view stretched right across N. Devon to Exmoor in the distance.

We contoured south around E. Hill past Higher Halstock Farm onto Klondye hill, past the army camp, where we encountered a few spots of rain! Thankfully short lived! Towards Moor Gate. We then made our way up onto the open moor, along a track heading towards Culliver Steps a popular swimming pool, where we stopped for lunch to the sound of roaring water. With the river in full spate no one took up the option of going for a dip.

Our hunger and thirst sated, we continued along a very waterlogged track towards Belstone, to the Nine Maidens stone circle, before dropping down the valley to re enter the woods along the E. Ockment river stopping to view the various water falls which rage when the river is at its height.

Eventually arriving back at the first footbridge, over Moor Brook, to retrace our steps back to Fatherford where we bore left, up along the beech hedge, dropping down across the A30 footbridge to return to Okehampton Station, for refreshing beverages and cakes.

In the end the weather was very kind to us…

The cycling  trip took place on the 4th May from Wadebridge to Padstow. 10 UTLSC members attended, which was a very good attendance looking at the fact that the trip had to be postponed for one week from the originally scheduled 27th of April (due to weather – forecasted wind gusts up to 55 mph).  However none of the scheduling troubles deterred members to attend. While the weather in Devon was wet, Cornwall  greeted us with a good amount of sunshine and some cold wind making the air very fresh and crisp.  The wind direction was from the east.

The cycling party departed Wadebridge  about 10:30 AM and we had a good cycle ride on the trail. We stopped for some coffee, as there is a new coffee booth in the middle of the trail. Some members took the opportunity for having a cup of coffee or tea.  As the trail is not long, it took us only another 30 mins to arrive to Padstow. Padstow was getting busy, the car park in the harbour was almost full, but it was unusual for Padstow to see few empty spaces in the car park. And so we marched to the pre-booked pub called the Harbour Inn, which is near by the entrance to the harbour. It is a traditional English harbour pub. They had seated us around 2 tables in the middle of the pub. We had some cold and hot drinks and some us have enjoyed the fact that the tea served was brewed from loose tea leafs, which is unusual these days. The food order and preparation took some short time, as they were serving food to both tables at once, so I can imagine that the kitchen got busy for a while. The selection of meals on the daily special board offered good selection including chicken curry and mussels, which Pavol decided to taste. The large portion was really large, more like for 2 people to share as for one.  But it was a delicious meal. All the other food was also very good.

The group decided to cycle back at 1:30.  The way back was good with a short stop in the middle to repair John’s saddle which was tilting to the back. Fortunately a spanner has been around to tighten the seat, nevertheless the problem repeated in the next mile. However we all had a good time and Mandy took some pictures to memorize the trip. It is great to be in the company of like-minded people and I look forward to the next social event with UTLSC. 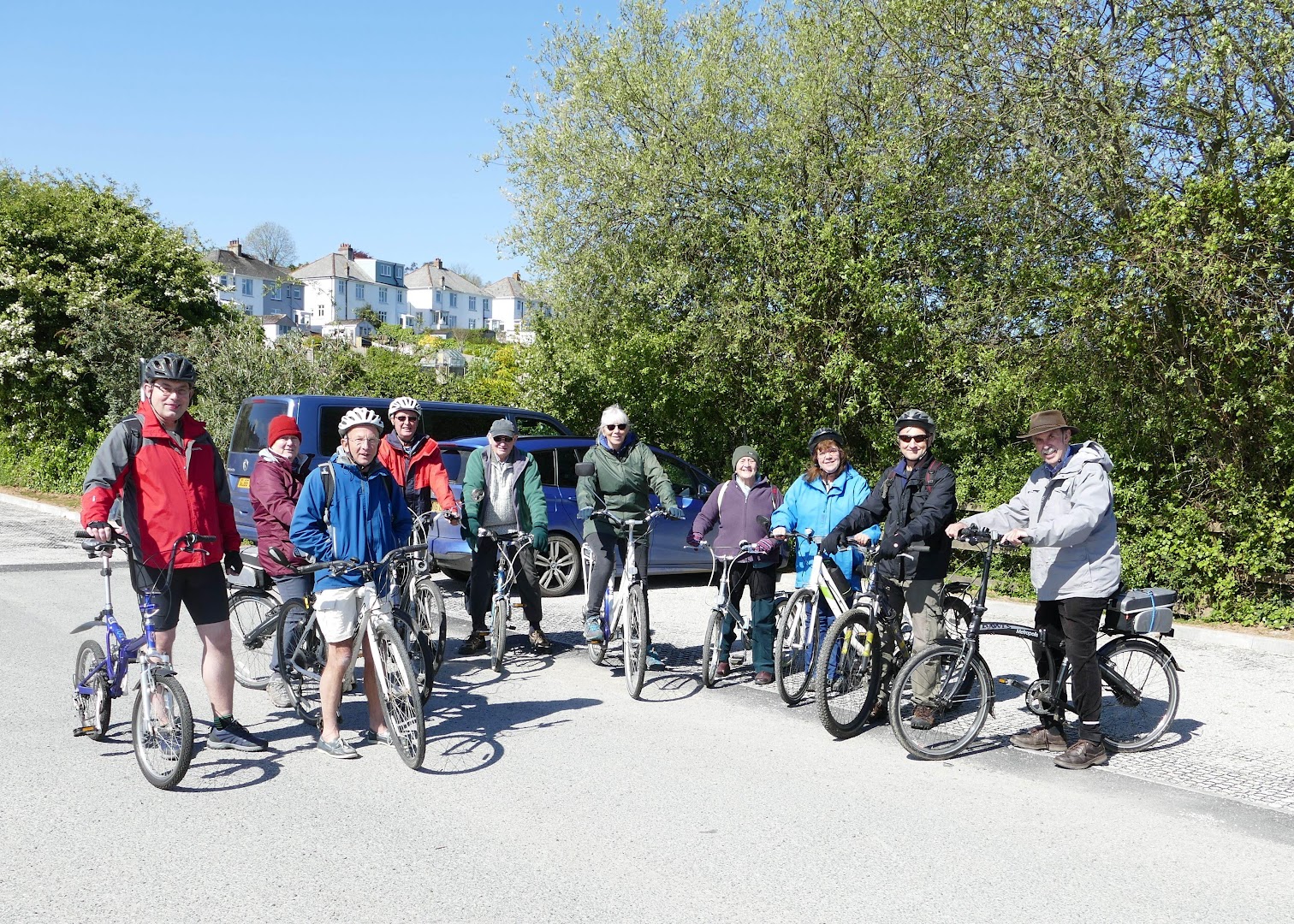 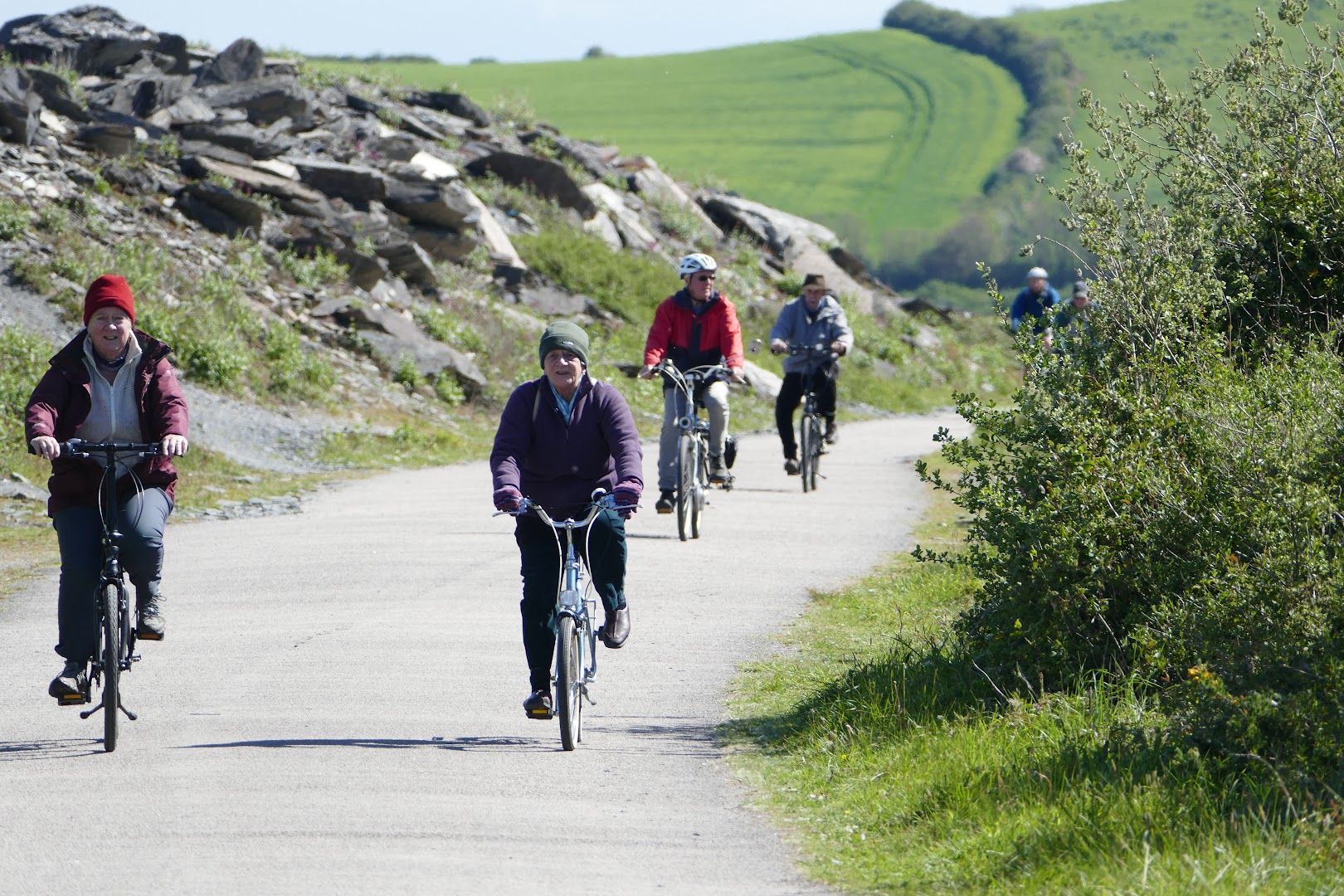 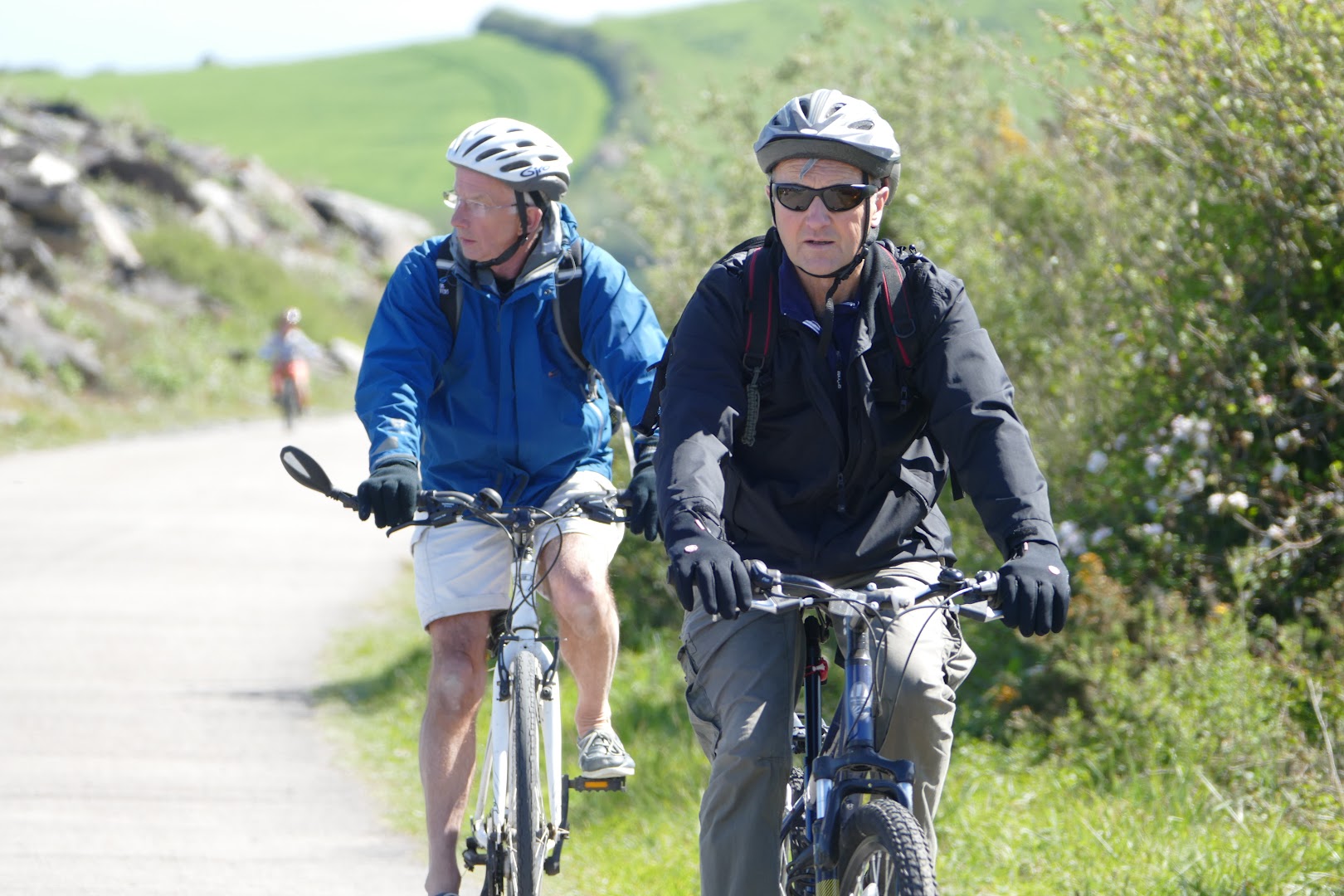 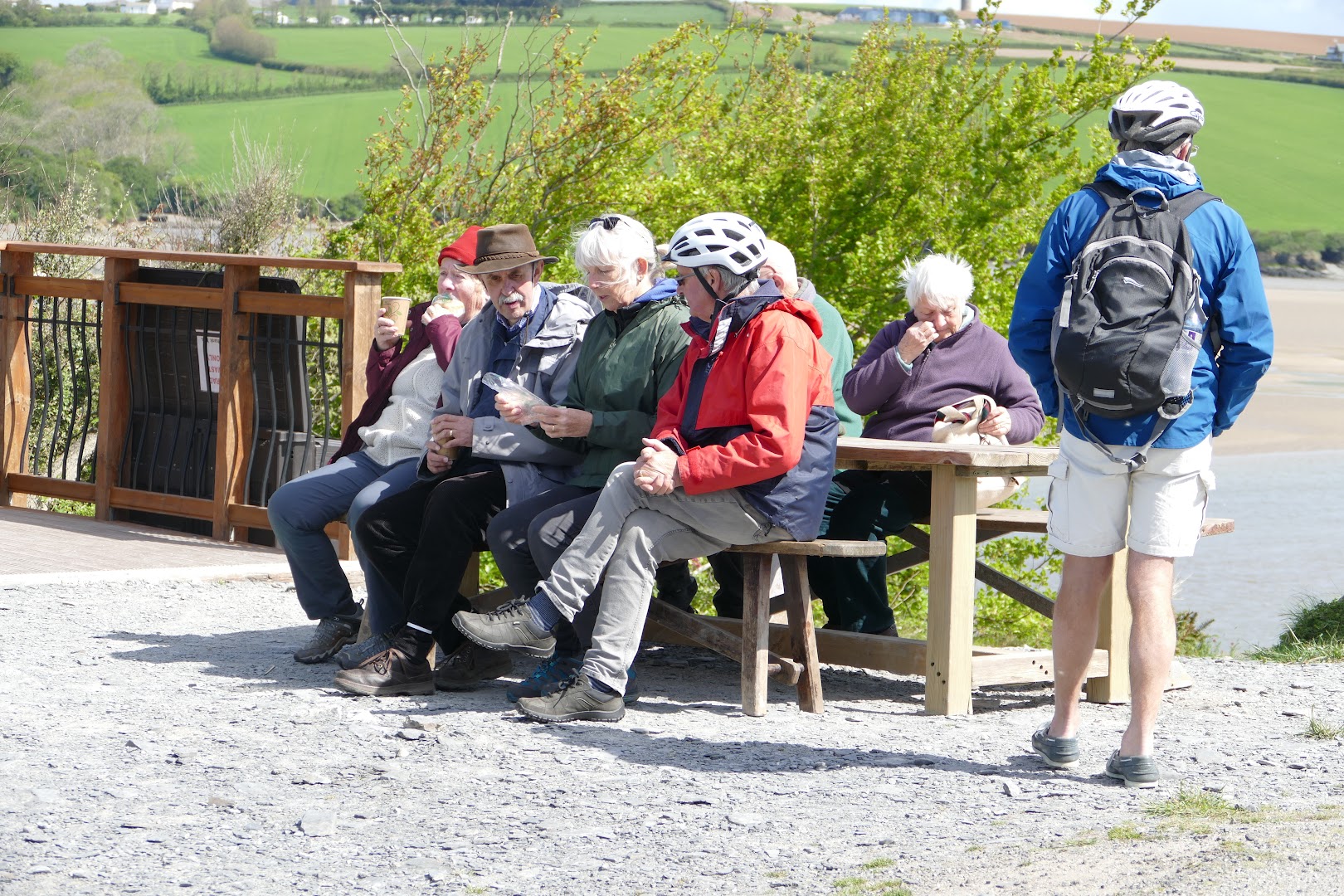 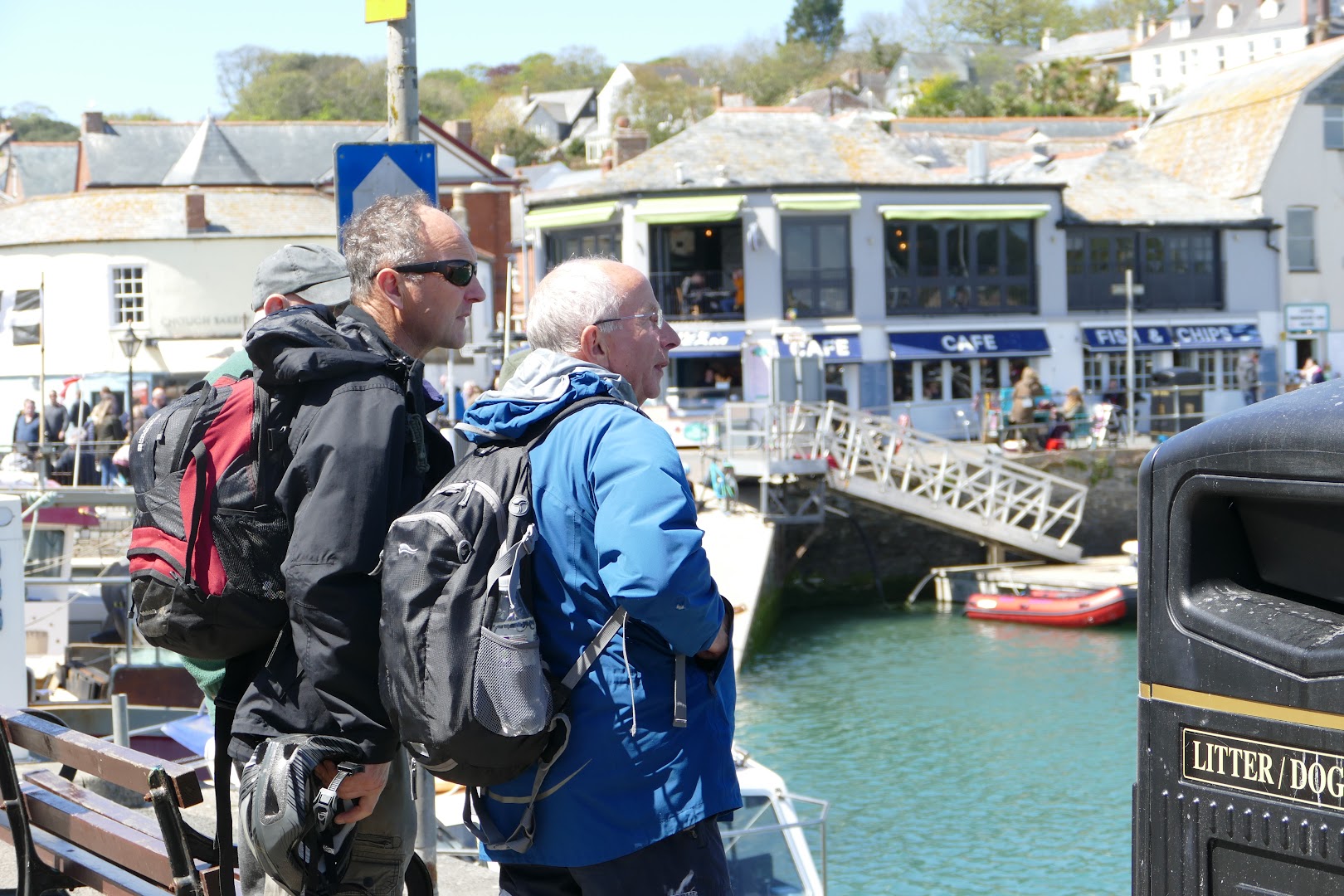 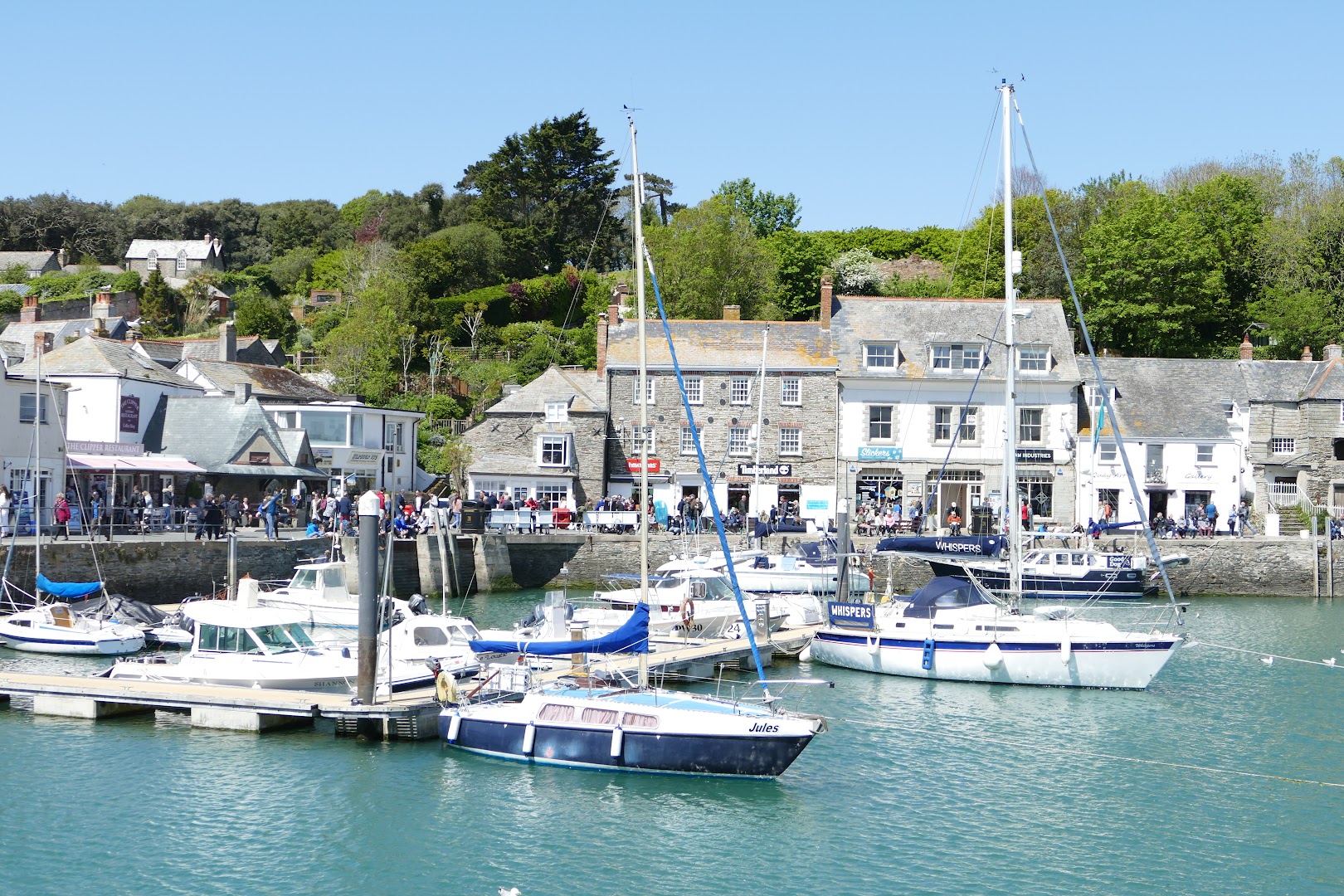 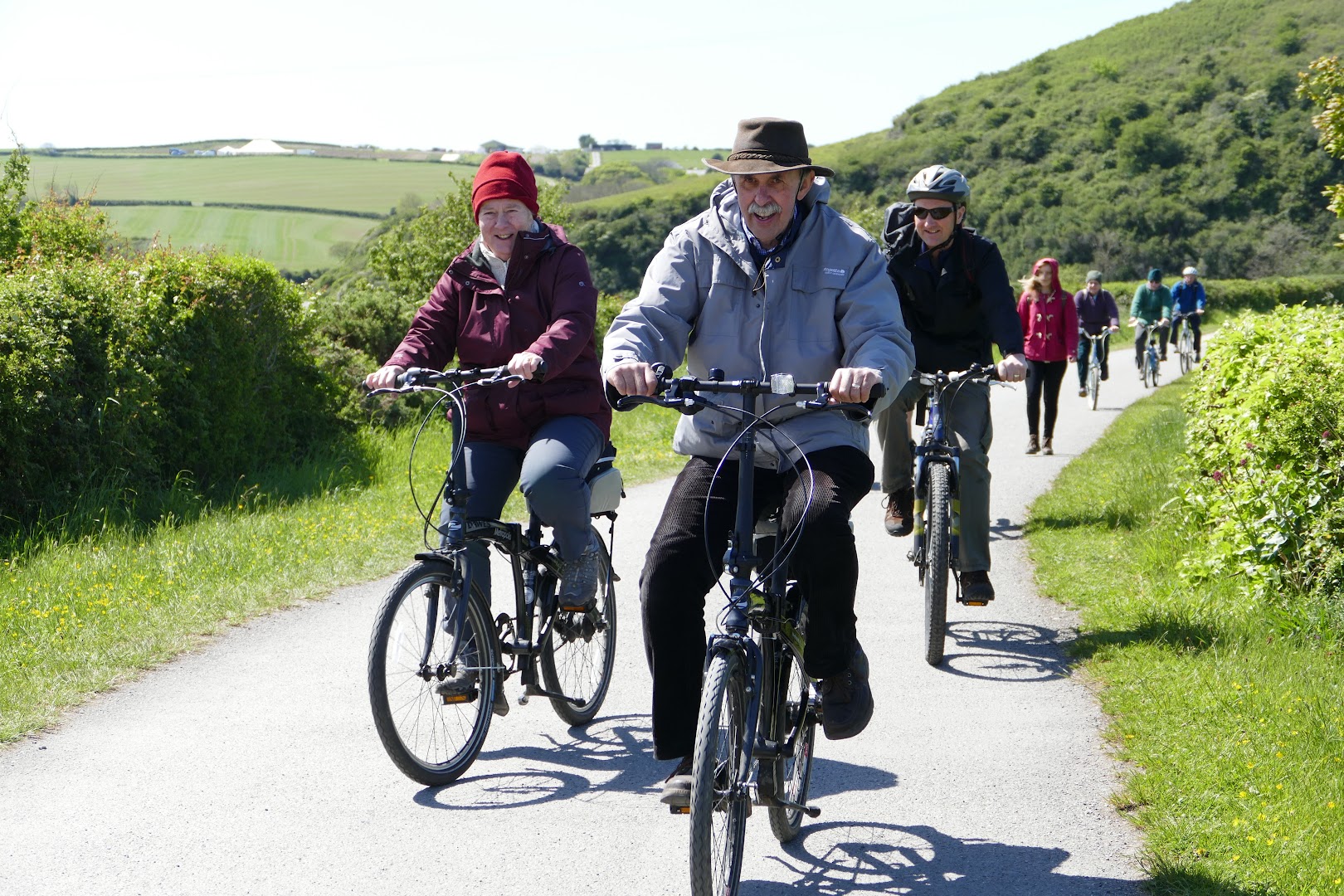 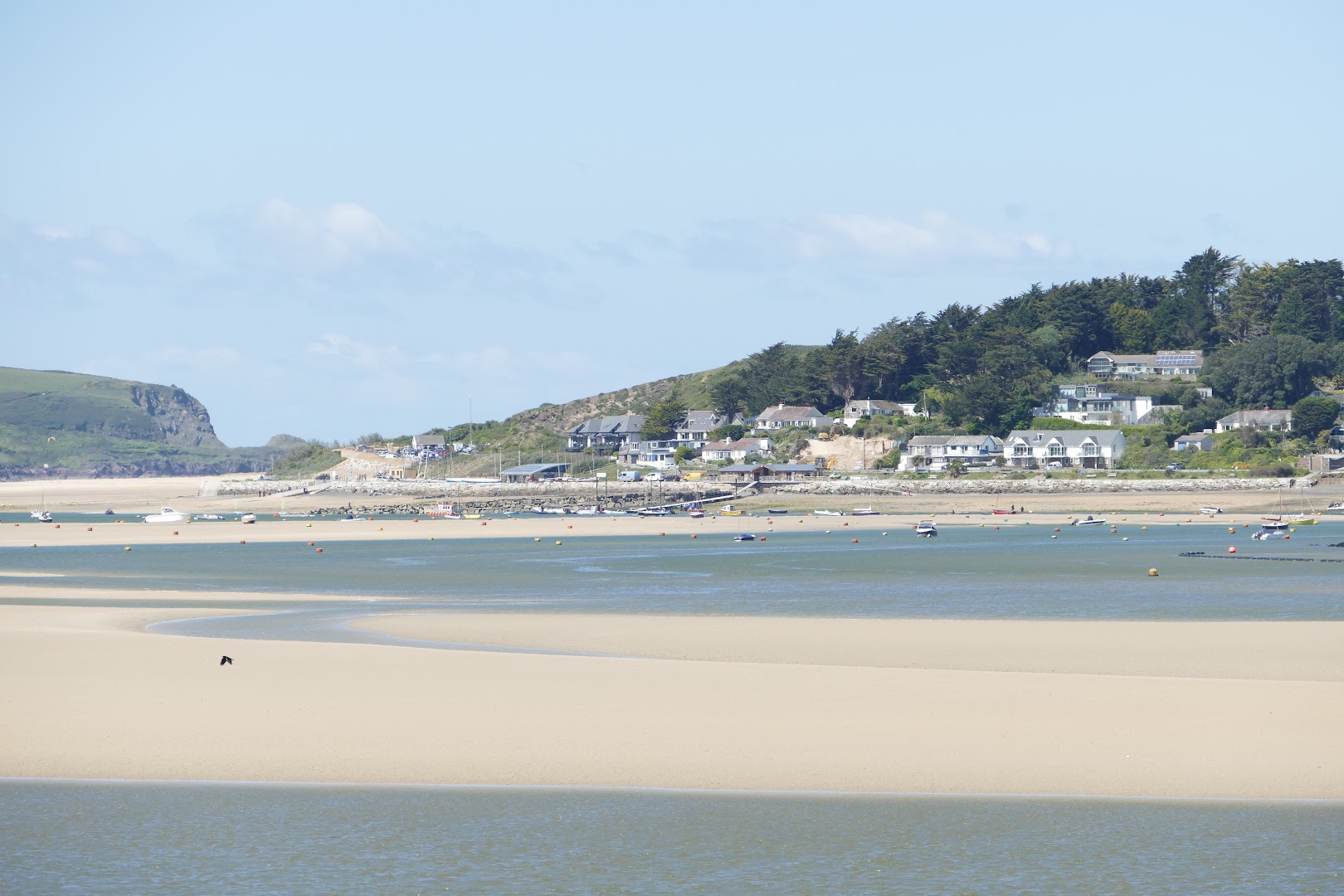 Our first social in March was a skittles and bring and share supper evening at Launcells Parish Hall, organised by Brian and Mandy Pollard.  Three teams of skittlers soon commenced their battle with the teams chosen by drawing names out of a hat to try and make the selection fair. Team 2 consisting of Roger, Nathan, John MacDonald, Linda and Brian beat team Team 3 (consisting of Ruth, John Buckett, Karen, Mandy and Pavol) by one point!  Team 1 consisting of Robin, John Savage, Sally, Sarah and Cilla were not far behind.  The winning team chose their prizes of various packets of sweets with Brian winning the box of chocolates for being the highest scorer with 79 points (with Linda and John MacDonald getting the next highest with 71). Many thanks to those who came along and enjoyed the sociable evening and “catch up” before the start of the season next week.